Learn the story of the Chambers mouthpiece

The original Giardinelli French horn mouthpieces had a great reputation until the early 80’s, when they were completely overhauled and turned into something very different from what they had been. Until that time they had been successful copies of mouthpieces that the top players in New York City and other major eastern cities had been using. Included were copies of mouthpieces of Myron Bloom, James Stagliano, Joseph Singer, Mason Jones and Barry Tuckwell. The Giardinelli “C” pieces were copies of James Chambers’ mouthpiece. Chambers had played with the Pittsburg Symphony under Fritz Reiner for one year after his graduation from Curtis in 1941, then became solo horn of the Philadelphia Orchestra (1942-1946), and finally was solo horn of the New York Philharmonic from 1946-1969. He also served on the faculty of The Julliard School for 42 years.

The change in the manufacturing process occurred when Mr. Giardinelli decided he would lengthen the shank of the mouthpiece so that it would be able to fit both American and European receivers. Unfortunately, and not completely understandably, not only the shank wound up being added on to, but the cup section of the mouthpiece was stretched as well. The new blank shapes were almost a quarter of an inch longer than they had been! With the overall length of the mouthpiece distorted in this way the pieces, completely understandably, no longer responded in the same manner.

At this time Mr. Giardinelli was close to the end of his career and steps were already being taken to sell the business. In this climate these issues with the horn mouthpieces were not at the forefront of the priority list for the new owners and so the situation was never rectified.

A year or so later, at one of our very first trade shows exhibiting at the New York Brass Conference, Mr. Giardinelli came by to look over our wares, scant as they were at the time. It was his suggestion that we should  add  the Chambers pieces to our line. He spoke enthusiastically to us about the popularity of the Chambers pieces and strongly suggested that we take them over and assured us that we would be doing so with his blessings. It took us a while before the business grew large enough for us to be in a position to be able to incorporate them into our lines, but his perspicacity and generosity on that day has come back to us many times since.

This is thought to have been due to a lack of precision in the creation of the original cutting tool that was produced to manufacture these mouthpieces at the time. (A ‘cutter’ is a type of form tool that was used to mass produce mouthpieces in the days before CNC equipment.) Nevertheless, this defect did not keep the “Chambers” model form being one of the most popular mouthpieces of its time, and so it became the version that everyone was familiar with.

When we decided to go into production with these pieces we knew that the rim was suspect and therefore went back to the actual mouthpiece that James Chambers had used for a proper rim model. We were lucky enough to have a copy supplied to us at the time by Philip Myers who had this mouthpiece in his possession. Several years later we decided to take these models a step further by making it more adaptable for a greater number of players and offering it in 3 different inner diameters as well as offering greater variety in the bore sizes and cup depths available.The original Chambers mouthpieces were available in 3 different cup depths, but with limited bore sizes offered for each. There was the deep cup, known as the C which was available in bore sizes 1, 4, 8 and 10. There was also the C12 model which had a medium shallow cup and was only available in the #12 bore size. Similarly, there was the C15 which had a shallow cup…again, only available in the #15 bore size. When we took the pieces over we offered the C12 and C15, now known as the CM (for medium) and the CS (for shallow) respectively with a much wider range of bore sizes. We also made all the cup depths available with two new inner diameter sizes making these models extremely adaptable. There is even a wide rim version available in all models.

The C Series line offers two different rim choices. Standard Rim Width= .132″ ( 3.352 mm)  The standard rim features a ‘reverse angle’ contour. This means that the high point of the rim is past the center point of the rim and gradually slopes downward towards the bite. This is the opposite of most rim contours.

Width = (1.55″ (3.937 mm) The wide rim has the same radius on the inside bite as the standard rim. The high point is simply extended out to add more contact area. These mouthpieces are wildly popular throughout Europe and Asia as well as here in the states. They offer a perfect blend of cup depth and shape, along with a very moderate bore size that combine to give this mouthpiece exceptional playability and adaptability. This mouthpiece has its place in major orchestras throughout the world as well as in the hands of solo artists and chamber players.

Available in 9 different inner diameter sizes, finding one to fit your needs is easy to do! Back bore: Medium with a straight taper

Outer and Inner diameter: See chart below for model specifications This unique model is based on a design taken from early Viennese style horn mouthpieces. The cup is a long funnel shape. This most unusual feature gives this mouthpiece great depth and warmth of sound while still allowing for tremendous efficiency throughout the ranges.

“The basic problem of finding a mouthpiece that both provides a ring to the sound in soft playing, yet does not break-up in extremely loud playing finds its solution here. This mouthpiece is virtually impossible to over blow and the sound is quite even throughout the ranges. This mouthpiece has no traditional bowl, but rather curves in instead down from the rim. This cup design, plus the slightly longer length of this mouthpiece, causes an M1 to feel like a conventional 4 or 5 bore and an M8 more like the conventional 12 bore. These mouthpieces simply do not take as much air to play as the same sized mouthpiece you are now using.”

Myers models are named after the size of their respective bores.

This rim is very narrow. It is a reverse contour rim in that the high point is slightly toward the outside of the rim sloping inward with a soft bite.

Renowned as a teacher and performer,Froydis Wekre has given master classes and workshops throughout Europe and North America. Her mouthpiece is a harmonic blend of the classic “V” shaped horn mouthpiece with a large, high volume bowl shaped cup. We are very honored to be able to offer this model to you. 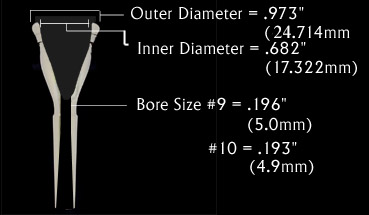 The Froydis rim has a crisp bite with the high point towards the inside with the rim gradually sloping outward. The New York Collection for Horn

The French horn portion of the New York Collection is comprised of 3 basic models .

Each has remained a perpetual favorite among horn players for the unique features it has had to offer.

Until the last 15 years or so, the J models were one of the very few French horn mouthpieces that were available in a large inner diameter. It was very popular among players who needed the more than ample vibrating room that this mouthpiece offered. On the surface of things, the cup is not as deep as a standard C Series cup, but the large inner diameter of this piece gives this mouthpiece an enormous amount of “overall volume”. This, along with the large bore size, makes this a large piece in just about every sense. The rim is on the narrow side which also favors the fleshy lipped player.

The S models feature a medium cup depth that is much more “V” shaped than the standard “C” Series cups. This is a medium shallow cup with a medium wide cushion rim. This is the most popular of the New York Collection of  French horn models. This mouthpiece has continued to be in demand by players all over the world to this day.

The cup is a very large volume, deep cup similar to our C series deep cup but with even more bowl to it.

The rim is decidedly on the narrow side. The flexibility in the bore sizes makes this mouthpiece very playable. B series cup and rim profile