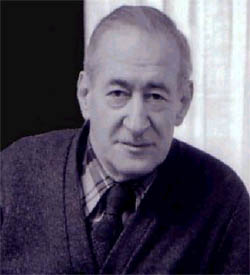 “In over 50 years as a performer and teacher of the trumpet, I have had abundant opportunities for testing the various principles of mouthpiece design. Now, as a result of this knowledge, I have developed my own line of trumpet and piccolo trumpet mouthpieces. Each element of these pieces has been blended together to give the most consistent results in quality of sound, attack, endurance and overall playability. I have been fortunate in having the finest quality in craftsmanship and the artistic integrity of John Stork to put a lifetime’s work into effect.” William Vacchiano

Cup depth is measured from the top of the rim to the next largest drill bit size.

The Vacchiano standard cup is a unique blend of both “C” shape and “V” shaped elements. Going from size to size does not necessarily mean that there will be more depth to the cup in terms of adding volume in a downwards direction. Rather, as in the difference between the “E” and the “D” cup, only the throat section is opened up, essentially “V-ing” out the bottom of the cup in more of a sideways shape. From the “D” cup to the “C” cup, both depth and a greater “V” profile in the throat is added. Whereas, from the “C” to the “B” cup, the throat only is opened increasing the overall “V” shaped profile.

It is the Cup Shape more than any other single aspect that represents the underlying concept embodying Mr. Vacchiano’s original vision for the design of his entire line of mouthpieces. The standard cup is what he referred to as a modified “V” shaped cup. This cup shape is in sharp contrast to the more popular “C” shaped cups that dominate most other mouthpiece lines including the ubiquitous Bach mouthpieces. Mr. Vacchiano felt that the modified “V” shape offered three major benefits: greater efficiency, a distinct “clarion” quality and improved pitch center.

The alternative PUMPED design is a combination of the classical “V” and “C” archetypes. Mr. Vacchiano recommended this variant in two possible scenarios. One was to allow more room for the lips to vibrate inside the cup. This worked especially well for the more fleshy-lipped player. The second application was to add more depth to the overall tone quality. Since the contour of the PUMPED cup increases volume by going outwards instead of down, this mouthpiece sidesteps the “tubbiness’ and slow response that is so often associated with deep cups while producing a darker, more resonant and “creamier” tone quality. The PUMPED cup offers a wonderful contrast to the standard cup and broadens the player’s artistic palette.

The Bore is the smallest internal point in a mouthpiece. It has a dramatic and immediate impact on regulating the speed of the air.

The Back Bore is the internal profile of the shank area of the mouthpiece. It begins just behind the straight section of the bore. A tighter bore leaves a longer back bore, a larger bore leaves a longer straight section in the bore area and can spill over into the back bore area, especially if the back bore is small and tight. The size and profile of the back bore affects the velocity of the air and hence the sound produced. All Vacchiano models are available in the sizes shown below. 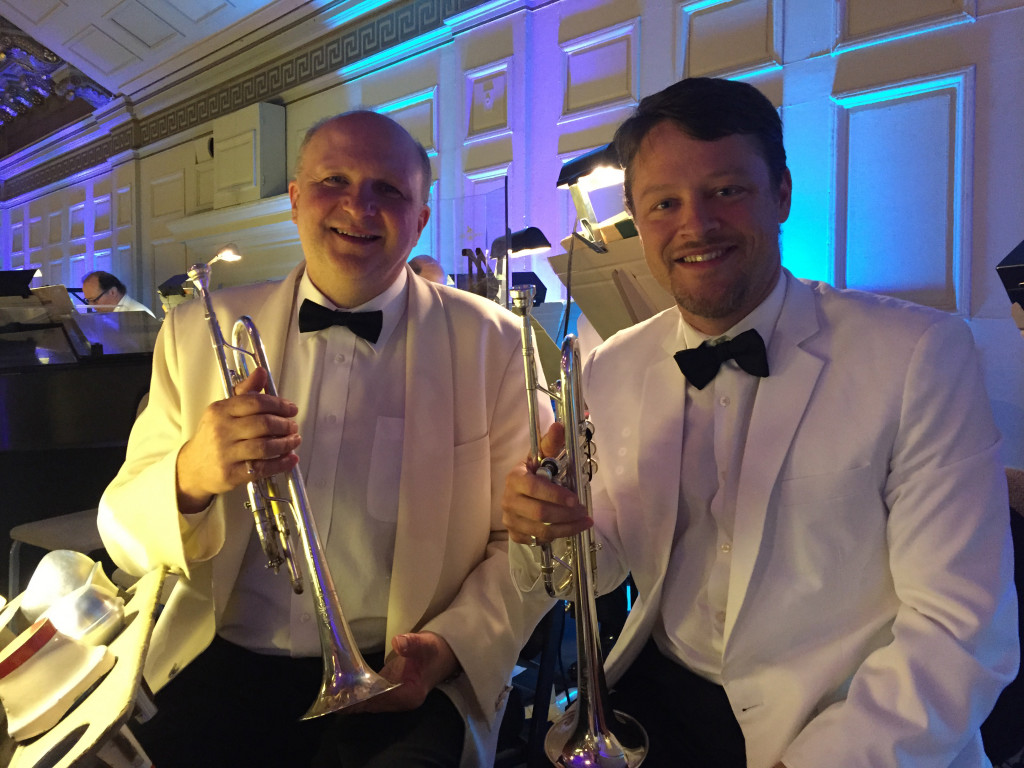 “John and Phyllis were incredibly helpful when I went through a recent equipment change. Meeting with Phyllis in person at their shop was worth every mile and minute it took to get there. Not only did she set me up with mouthpieces that allow me to more easily play with my sound: In our sessions in person and over the phone, she made insightful observations that were tremendously helpful with some issues I was working through in my playing. In the end I ended up with something slightly different than what we had thought might be the end result. She remained flexible and open minded throughout the process until I had something that worked. I have had many students who have also worked with The Storks and their approach is exactly the same. Thanks John and Phyllis!”  Ben Wright, second trumpet, Boston Symphony Orchestra 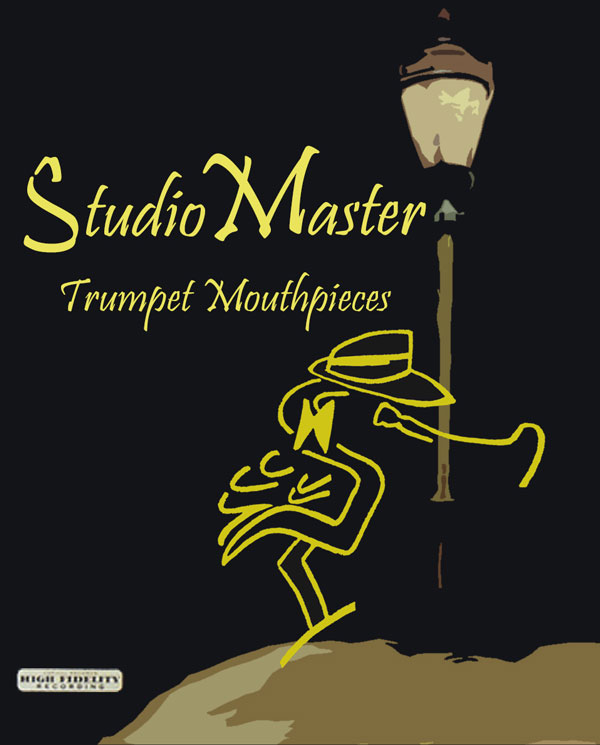 The Studio Master Series offers a wide range of options designed to find the optimum balance of resistance between the player and his equipment to achieve maximum air velocity in the upper register. There are Five Major Elements that we manipulate in order to achieve this balance – overall length, cup depth and shape, bore and back bore. 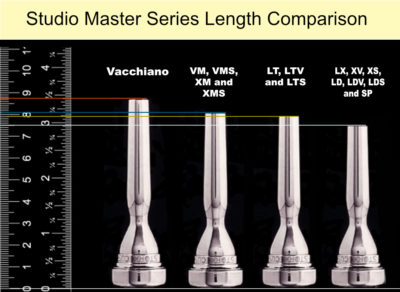 The Studio Master cups are shaped quite differently than most shallow cupped mouthpieces. They employ a “Dual Cup” concept. This allows us to carefully and purposefully manipulate the two most important factors relating to shallow cupped mouthpieces: Lip accommodation and Air flow. The top cup is designed to allow for more room for the lips to vibrate freely. The bottom part of the cup (throat area) is used to regulate the air flow. Here is a comparison of the shallowest Studio Master cup versus the most common shallow cup design:

The yellow arrows help to highlight the differences in cup design. The top part of the cup has a great deal more room just under the rim in the walls of the cup. Not only does this allow for the lips to vibrate more freely, but it is an important factor in the robust sound that the Studio Master pieces are known for. This extra room also lets players with fleshier lips play a shallower cup than they generally are able to play. The extra room in the throat area of the cup (bottom of the cup, or entrance to the bore) allows more air to flow through more quickly. 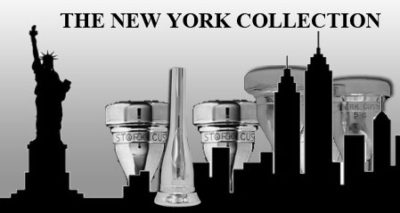 It’s been more than thirty years since Stork Custom Mouthpieces opened the doors to our first shop overlooking Broadway and 48th street in New York City. John Stork had spent the prior six years working at Giardinelli’s brass pro shop on 46th street. During that time he had apprenticed directly with Mr. Robert Giardinelli learning the art of mouthpiece customization and duplication. He honed his craft for the brass playing elite of the day and developed an extensive knowledge of their mouthpiece preferences and predilections. Many of these mouthpieces had been developed specifically for these players over a period of time through many years of experimentation. Others played on standardized pieces that   were popular at that time, but are no longer manufactured. Over the years we have made many copies of these models for players throughout the world. We have decided to offer these models as limited edition duplications. Each mouthpiece is hand crafted by John Stork to original specifications. Each design brings with it a long tradition of excellence in performance ensuring its survival, handed down over many generations…from Master to pupil.

Our Mount Vernon collection are all hand made copies of vintage originals. These mouthpieces share common features like very bowl shaped “C” style cups. They also have back bores that are larger than the standard Bach back bore seen in present day models. These elements in combination guarantee that the emphasis is on the quality of sound.

The S1 was a design originally conceived by William Vacchiano. The cup shape and volume belong to an original Mount Vernon 5B cup fit to a 1C rim. The MV5B cup is unique in that it has a modified V shaped cup ( compare the S1 cup to the S2 cup below ). It is this cup shape that inspired the Vacchiano line. The bore is larger than standard at 3.8 mm as is the back bore which is a symphonic “D” back bore . This design has been passed around among principal players in orchestras all over the world for the past 35 years or so now. This kind of consistent staying power over the years earns this model a permanent place in the New York Collection. The S2 has a tremendous amount of cup volume without an excess of depth. Put another way this is a very “C” shaped cup with lots of bowl to it. The bore is quite large at 4 mm., but the back bore is moderate in size, not a whole lot larger than our standard back bore. This is a very large symphonic mouthpiece and has served the principal player of a major American orchestra for many years.